I’m not sure I’ve ever seen this verse lived out in my own life like I have the past couple of years.  Right when Switchboard was at it’s peak- the best place we had ever been as an organization, we started discerning and hearing God in extraordinary ways.   As you all well know, God rarely speaks what you expect Him to be speaking.  His ways are so much different than ours, and His plans so much different than my own.

Before this, we never saw this coming.  I expected to run with Switchboard until the day I died, and was determined to push forward with it no matter what.  What I didn’t consider, however, was what if God spoke so undeniably clear that there was a better way to advance the Gospel to every nation?  What if the mission could go further alongside something else? What if we could be stronger together then we ever dreamed?  What if God asked us to lay Switchboard on the altar?  Those questions quickly became more than hypothetical, and we soon realized it was indeed what God was asking, and it is what we had to do. 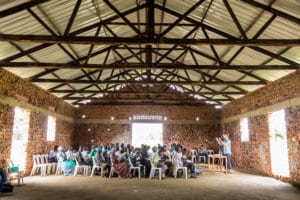 I could fill page after page of so many stories of how God has spoken to us the past couple of years, and I hope to one day get to share all of them with you.  The cliff notes version is: God has spoken time and time again the way to go, with literally not even one single thing that could possibly be interpreted as a no.  It’s been abundantly clear, and as followers of Christ who have given up every right we have to be servants of the most high God, our ONLY option is obedience.  Joyful, glad obedience.

The sentimentality of this is the hardest part- as Switchboard has been so shaping and forming for so many of us.  But I just feel really excited.  I have ZERO doubts that God is speaking this, and we ONLY want to be where He is.  Like Moses- we only want to go if His presence goes with us, and if He is not there we will not go.  Strength to strength and glory to glory…we’re only moving forward!

8 years ago we walked upon this rushing river, and we jumped in with everything we had.  We’ve been riding those rapids ever since, but as you know, all rivers eventually end into a larger body of water.  This adventure was always meant to flow into an ocean, and there a large expanse of possibilities await us.  It’s a season of more- of going deeper and new places.

We are beyond excited to announce our merge with Onward Church Planting.  Like the old African proverb says, “If you want to go fast, go alone.  If you want to go far, go together.”  We have already seen such incredible fruit from the joining of two missions, and fully believe that God is just getting started!   We may have a new name and a new look, but the mission remains the same.  Join us over at Onward for all the latest updates about how the Gospel is advancing around the Globe!

Thank you so much for being on this journey with us.  We love you guys more than we can say.  Here’s to a new chapter….Onward we go!